The origin of Rieldans and how this particular type of dance can make you feel proudly South African. 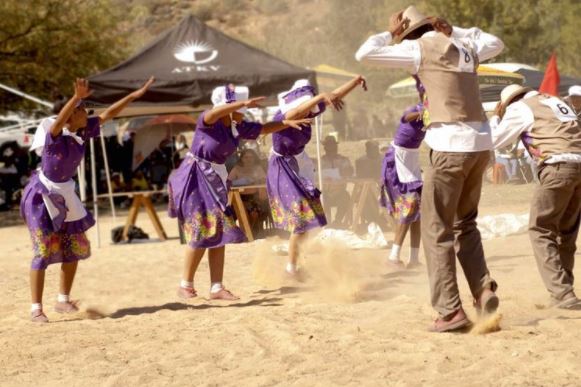 As a child in the Northern Cape, my grandmother would tell me stories of how she used to dance the night away. She and her family would travel for up to 400km by donkey cart to attend a wedding and then dance until sunrise. The dance my grandmother spoke about so fondly was the Bushman Rieldans or Namastap (Nama walk).

As I grew up I didn’t see my grandmother or other family members do the Rieldans. Perhaps it was because many dancers often drank alcohol, and since my family were stern Christians, they stopped taking part in this cultural activity. It’s a sad loss, because, while classified as coloured, I always felt that a native or indigenous part of me was lost. I only knew how to be a Westerner and to behave like a Westerner.

Fast-forward 25 years later to when I saw the Rieldans performed in the small town of Clanwilliam. This was the first time in my life I experienced the cultural activity that felt close to heritage and culture and it filled me with pride and joy. Needless to say, I fell head over heels in love with Rieldans and have been visiting small rural towns to celebrate this unique part of my heritage ever since.

Rieldans is a spectacle with intense and fast footwork, lots of dust, brightly coloured clothing, live music, and loud encouragement from onlookers. Storytelling and the courtship ritual play a significant part in the dance festivities, and animals like the oryx and meerkat are imitated in a way that evokes laughter. As part of the courtship ritual, boys take their hats and throw it down in front of dancing girls. If a young girl likes a particular boy, she will pick up his hat and put it back on his head to show that she likes him.

This dance used to be performed mostly by farmworkers who had no formal dance hall, so they performed outside in the red dust. Over time the ability to kick up a dust storm became a requirement for being an exceptional Rieldanser. Onlookers will only cheer if dancers are able to kick up a substantial amount of dust. Farmworkers didn’t have much, but it was a requirement that you look your best.  The women would wear brightly coloured bonnets and the men would wear patched trousers.

Rieldans is experiencing a huge revival in South Africa and at a 2015 international event in Los Angeles, a young team from Clanwilliam, Die Nuwe Graskoue Trappers, won Gold in the Ethnic Folk Dance category as well as silver medals for performing the Rieldans. Because of this, youngsters are now seeing Rieldans as an art form that can take them places. Watch a short clip of them in action below.

Rieldans makes me feel proudly South African. Its roots are from the first people in South Africa who celebrated life by going into a trance through dancing around the fire. I choose to value and cherish this part of my heritage as I move into a South African future where we all rediscover our African roots.

This image of Rieldans was done by Terence Visagie

Terence Visagie is a visual artist and works as a graphic designer at Fetola. He provides visual support to a range of programmes managed by Fetola, as well as creating graphic content that promotes and encourages engagement of Fetola clients and stakeholders.